Weather challenges and an anti-bike culture with corresponding lack of infrastructure made for miserable riding these last few weeks.  We are curious why a route was designated through here at all, assuming that the Adventure Cycling Association’s map gives us the most optimized path through this part of the country.  Bike lanes are rare and abruptly begin and end at random; sidewalks are equally unpredictable, overgrown, impeded by utility posts, and heaving from tree roots; and South Carolina as a state seems to have opted for rumble strips along the white line instead of shoulders, thereby pushing us further into the lane to the frustration of impatient drivers.  GoogleMaps has even failed us when we tried to reroute away from what we discovered to be a high-hazard road.  Really, the GoogleCar drove along this?

And yet, we have still had a generous helping of highs to offset our lows.  A few weeks ago, as we tried to out-pedal an oncoming storm, we pulled over at a gas station for a bathroom break and hot chocolates, to be approached by someone who recognized us from our time in Montana back in May.  What are the odds of crossing paths again in a little Podunk town across the country?  Even more serendipitous, as we rode into Wilmington, North Carolina and were stopped in traffic, we heard someone call out Lil’ Mo’s name.  We turned around to see a preschool mom from Seattle!  She was at our send-off in March, and her family recently moved to Wilmington and just happened to be right behind us on the road!  Sadly, both of those reunions were short-lived given the urgency of the weather and Wilmington traffic respectively.

As a city, Wilmington appears to want to be bike-friendly.  It has some bike infrastructure in place, but the drivers have not gotten the memo, and as always, the suburban sprawl that surrounds any city is the most hazardous for biking.  Doing our best to avoid the suburbs, we visited the USS North Carolina and the Cape Fear Museum with little biking challenge.  The USS North Carolina was our first naval vessel visited, and the kids were delighted with the novelty of a real battleship. 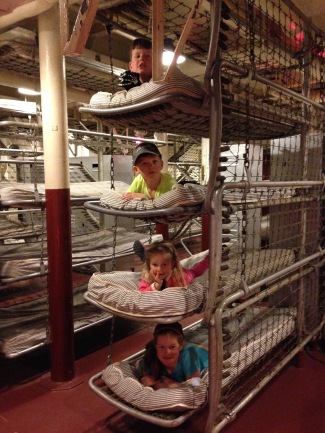 We closed out our time in North Carolina visiting friends we knew in our early army days back in Colorado.  On the day of our rendezvous we tried again to out-pedal the onset of another storm to get to them, but failed, and got caught in a continuous drenching downpour for the last five miles.  We showed up hungry, cold, and wet, and they warmly opened their doors and did not flinch at our feral appearances. They too have four kids in the same age spread as ours, so collaborative play abounded.  We enjoyed the beach in the brisk weather. We even got glimpses of dolphins to the delight of everyone, but especially Sissy!  In addition to great company and conversation, our friends treated us to a Low Country Shrimp Boil to better acquaint us with flavors of the South. We were sad for the weekend to come to an end and hope another fifteen years does not pass before reconnecting with them again.

The drenching rain brought in another cold front, so we bundled in our cold weather gear again as we crossed into South Carolina.  The route had us on roads with little to no shoulder and continuous rumble strips along the white line with unrelenting high-speed traffic.  Bridge limitations necessitated the route, but the drivers did not want us there.  In all honesty, we did not want to be there either, but we were between the devil and the deep blue sea.  Morale was already lagging from the persistent winter weather where winter is not supposed to be, but the consecutive days of stressful road and traffic conditions were sinking it faster than the Titanic.  Team Frank even witnessed a dog get hit by a car, which dampened the mood of what had up to that point in the day been an improved South Carolina riding experience on a rural road.  Things began bottoming out on our first camping night in the last month.  We could not make the distance to a hotel that day because we had to set out late in the morning to await the thaw of the previous night’s frozen rain, so we aimed for the campground within our reach. We arrived at the primitive campground shortly before sunset and hastily set up camp and made dinner.  We all went to bed early since there was no joy to be had sitting in the dark cold, and that night’s low was in the 20s.  We learned our temperature limit for camping.  The concentration of body heat in the kids’ tent ensured their overnight warmth and comfort, but Old Man and I were cold and did not sleep much because of it.  We debated getting a U-haul and driving the rest of the way to St. Augustine for our own safety and mental health.  Leaving that possibility open, we still had to make it to civilization to execute any change in our plan.  As we geared up, we received an email from our preschool benefactors in Seattle.  They gave us a very generous AirBNB gift card as a gift for warmth on a chilly night.  Talk about divine timing!  We were struggling and feeling isolated with our problems and a group of big-hearted friends across the country offered us thoughtful consolation. 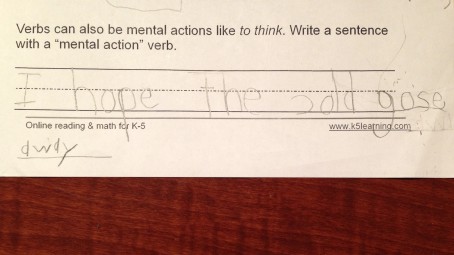 Things turned around after receiving that gift.  The weather that day warmed to the 50s, the sun was shining, and suddenly drivers became friendly.  Big trucks moved over for us and tooted their horns for the boys.  Construction workers gave us an unsolicited escort across a bridge and offered us water at the end of it.  We finally saw other cyclists for the first time in weeks. Later, as we pulled into a grocery store an older gentleman approached us asking to take our picture and tell us a bit about the local area.  The kids even noticed and commented on the change in our public reception.  As always, God placed and inspired the right people at the right time in our lives.  We really needed kindness and we got it in spades.  Once we took a step back we quickly realized that despite our fatigue with certain aspects of this leg of the adventure, we have been healthy and the bikes in good repair.  If either of those issues had arisen during these trials we could have truly been sunk.  But we weren’t.  God did not give us more than we could overcome.

We made it to Charleston where Aunt B met us.  She took our three-ring circus in stride and is likely now in an isolation unit to decompress from having her hand continuously held by a Little, being affronted with endless knock-knock jokes, and enduring competition to sit next to her at every meal.  Charleston was ranked the worst bike city in America by Bicycling Magazine in 2016.  Knowing that, we chose our hotel and planned our touring accordingly.  We walked and Uber-ed for sight-seeing downtown.  We stopped by Patriot’s Point along our departure route to check out the USS Laffey (a destroyer), the USS Yorktown (an aircraft carrier), and the USS Clamagore (a submarine that is slotted to become a reef in coming years). We only need to tour a cruiser and we’ve completed Battleship the game.  Maybe Milton-Bradley will award us an anniversary edition?  And rounding out our tourism of early NASA space exploration, the Yorktown housed a replica of the Apollo 8 capsule it recovered. 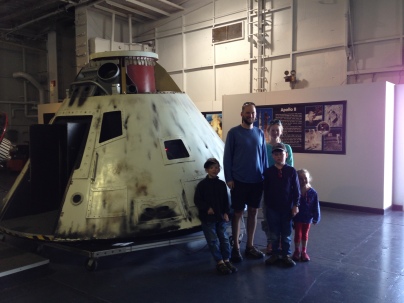 The extended forecast shows continued warmer weather, so perhaps the cold is truly now behind us?  The by-chance and scheduled reunions have rejuvenated us and there are more to come in the weeks ahead.  Here is to hoping that our ship has come in and it will be plain sailing from here on out.

♪♫ It’s a world of hopes and a world of fears.  There’s so much that we share that it’s time we’re aware it’s a small world after all.  ♬ ♩