Fall is in full force, as is evidenced by the unpredictable weather that defines the season.  The tree colors are in full effect, and serve as a saving grace against an often gray sky blurred with misty precipitation.  It has gone back and forth.  One day it is sunny and nearly 80 degrees, the next day it is overcast or rainy with a high in the 40s or 50s.  The meteorologists publishing their forecasts do not seem to know what to expect, as they radically change the forecast almost hourly, which makes for difficult ride planning on our part.  And to think I was questioning if we had been hauling all our winter gear since Indiana for nothing!  We have been glad to have it lately!

Thankfully, we got to sit out a chilly, dreary day at Camp KC, owned and operated by Otter’s former cello teacher’s brother and sister-in-law.  She told us we had to stay there and that the kids would have a blast.  She spoke from experience.  Camp KC serves as her family’s bedrock of stability and relaxation. We stayed there for 2 nights, and the gloomy day in between was brightened for everyone with horseback riding, watching the guinea fowl and chickens roam the farm, and loving on the dogs, cats, and tortoises.  There were plenty of toys and games to occupy the kids, and the boys were most enamored with the treehouse-in-progress. They dedicated their entire afternoon to cleaning it out and contributing to its continued construction.  Our hosts were exceptionally patient with and encouraging to the kids in all the different endeavors, and made all of us feel welcome from the get-go.  Needless to say, the kids barely noticed the weather, and we have been bombarded with questions asking when we will go back. 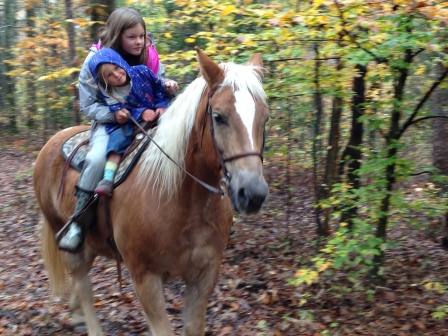 We left Camp KC with a dismal weather forecast for our day, which fortunately proved to be far better than expected, to include sunshine.  We headed straight for the cousin of Tango and Lil Mo’s beloved preschool teacher.  The cousin is a former kindergarten teacher with an elementary age granddaughter, so had a house and disposition well-appointed and conditioned to lively kids.

The previous day’s inaccurate weather forecast repeated again the next day, but not to our advantage this time.  It was cold and wet the entire day.  We stayed the night at Willis United Methodist Church, a church that actively reaches out to traveling cyclists.

We were so grateful to be indoors for the night after slogging through the miserable outdoors all day.  I merrily used the church’s kitchen to prepare dinner.  When saying grace at that meal Lil’ Mo concluded her prayer with a very exaggerated “A-men.” Afterward, she clarified she did that because we were in a church and encouraged her less pious siblings to follow suit.

The church was also a topical place to stay, in light of our recent historical touring, because of its use as a Confederate hospital during the Battle of Malvern Hill in the Civil War.  The original structure burned down after the war, but the wood paneling in the church’s library, where we slept, was salvaged from the original building for its reconstruction.  Upon leaving the church we set out to the, you guessed it, Malvern Hill Battlefield.

The weather remained miserable and was sinking morale, and by extension the output of our stokers.  It took us seemingly forever, in the cold rain, to make it to our lunch spot at Charles City County Courthouse.  It is the third oldest courthouse in the country, and until 2007, when it ceased being used for such purposes, it was one of only five courthouses in America that was in continuous use for judicial purposes since before the Revolutionary War.

We camped that night, and were singing praises for the covered and electrified pavilion at our disposal for preparing and eating our meals in these dark days of autumn.  The boys salvaged the soggy day with their art of play.  They invented the game Pine Cone Dodge. The name pretty well explains the game, but a few nuanced rules include that a hit to the head or body resets the entire game, a hit to an appendage requires you continue without the use of that limb.  It was all fun and games until Tango got hit in the face, and continues to have a buckshot of pine cone scratches on his cheek.  He clearly did not successfully dodge it as the name dictates.  Another ploy at risking life and limb occurred when the boys unwittingly discovered the phenomenon of hydroplaning.  Combine a slide that has been unutilized during days of rain and boys wearing rain pants and you have a pretty good chance of flying off the slide.  I caught the first one airborne out of the corner of my eye, to only see the next boy’s lit up face racing to try his hind end at wet-slide-flight.

Fortunately, both boys exited the campground with all of their limbs intact and all six of us made it to Williamsburg.  We embraced the warmth and comfort of being indoors again and were happy to see the sun come out.  We rode to the Jamestown Settlement along the Colonial Parkway today.  The scenery was beautiful, to the point of both boys commenting on it and suggesting it would be a good reason to choose here for a post-tour landing spot.  I told them that when we release our Amazon-style memo, soliciting incentive packages to entice placement of our family headquarters, I would be sure to include Virginia.  The Jamestown Museum thoroughly depicted how the convergence of the Powhatan Indians, British Colonials, and Angolan slaves began today’s America.  The outdoor exhibits included a Powhatan village, which to Tango’s delight, showed they furnished their yi-hakans  (houses) with bunk beds. 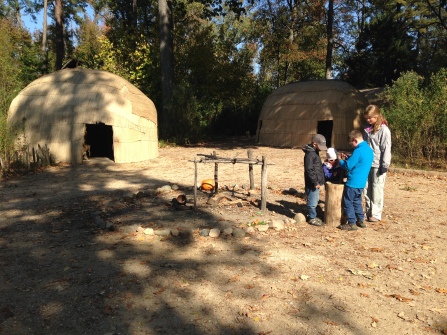 We talked at length with the fort’s armorer, and boarded the two reproductions of the original ships that delivered the colonists to what became Jamestown.  Can you imagine sailing across the Atlantic on that small of a vessel???

Tomorrow, we depart on motorized wheels.  Farmer Fred and Lucinda invited us back to their piece of heaven in Montana to take care of their goats and chickens while they visit their family around the country.  Since Montana does not appear to be in our post-tour employment cards (but will be included in our memo distribution list nonetheless!), we are seizing this opportunity to get another stint in this beautiful state.  The timing is perfect. We are ready for a breather from biking, Camp KC whetted our appetites for more farm life, the bikes need a ton of maintenance and will reside at a local bike shop for their respective overhauls in our absence, worn out gear is being sent in for repair and/or replacement, and we will have a real kitchen for making a proper Thanksgiving meal.  Undoubtedly, the weather will be equally or possibly colder upon our return, but we’ll unavoidably pack on a solid layer of insulating blubber while sitting in the car and eating like kings with a real kitchen.  Perhaps that insulation may also slow us down and prolong our cold exposure, but we will cross that bridge when we come to it….  Onto high-speed travel and civilized living.

9 Responses to Under the Weather