The big sky is upon us

We left the farmlands of eastern Washington and western Idaho for the river canyons of the Clearwater National Forest, as we approached Lolo Pass. 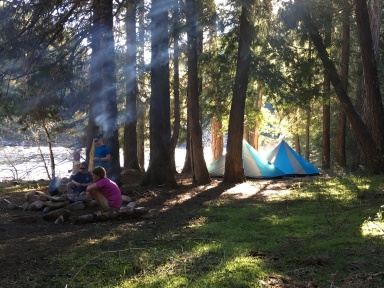 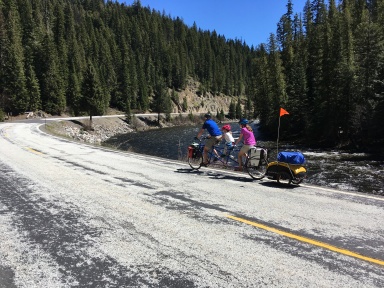 Each day brought something new to tickle our fancies.  One of the information signs along SR-14 in Washington claimed that region had the highest concentration of waterfalls in the country.  From my limited highway vantage points, I would argue that the area surrounding US-12 in Idaho must be a close second and each of us delighted in pointing out the next picturesque, misty cascade to the others.  The following day, we had our first sights of white water rapids and even got to see some rafters in action, which excited everyone.  Tango could barely pedal for lack of focus because he was so dazzled by the changes in water flow and the terrain that contributed to them (and those who know him can accurately imagine the loud, joyful narration of those observations). The next day, it seemed as if the warming temperatures suddenly hatched butterflies en masse, as they were everywhere and at times swarming along the shoulder of the road.  Ear-to-ear grins erupted anytime one landed on one of us, with Lil’ Mo convinced they were drawn to her almost exclusively.  (*side note: Lil’ Mo’s beauty secret is rubbing dandelions on her cheeks.  Not only does it serve as much coveted make-up, the pollen allegedly attracts butterflies to you!  Also, crayon has recently been used to color her toenails.  Perhaps she is the next Dolly Parton given her penchant for singing and makeshift make-up?) 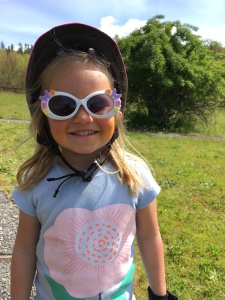 Another day we finally completed our climb up Lolo Pass and were greeted with snow! 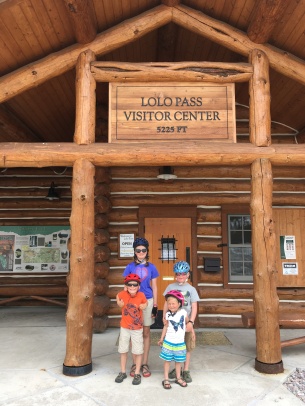 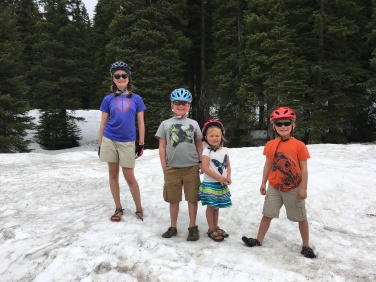 On our first night camping in Montana we fell asleep to the sound of wild turkeys gobbling—a marked change from the rapid water serenade we had grown accustomed to in the river canyons, or the croaking frogs in farm country.

All in all, our week being disconnected from the world—no email, texts, news, few people, and fewer modern amenities—was idyllic.  A moment from this period that I would like to freeze frame:  We stopped for a picnic lunch at Eagle Mountain pack bridge in Clearwater National Forest along the Lochsa River.  It had been another day of a continual gradual climb (one of several leading to Lolo Pass).  It was the third day of rough camping without plumbing of any sort.  The sun was shining, a bald eagle flew overhead, and everyone was in a good mood.  We relaxed on the rocks and boulders that rested next to the white, rapid river for a while after lunch.  We had all stripped down to varying degrees (and some of us attempted some targeting bathing– reference an earlier post).   The image I want to remember is this: Lil’ Mo, with her sturdy preschooler body, standing on top of the rocks like she owned the place;  Tango’s post-lunch potbelly on his spindly frame scrambling across the rocks and exploring the contents of the shallow pools with complete joy and wonder; Otter’s fluorescent white skin as he dangled his feet over the fast moving water with a mischievous grin; and Sissy, with her newfound self-consciousness, attempting to seek cover as the Old Man talked with some New Zealanders on the bridge (who were totally unfazed by our states of undress).  It was a moment of innocence and complete contentedness.  Everyone was relaxed, soaking up the sun, and without a care in the world (except Sissy).  As simple as that would seem to achieve, those moments are so rare, and as a result are very cherished when they occur.

Lessons learned during our week in the ‘wild’:

If 19th century salt pork is comparable to today’s SPAM (don’t judge, we had 5 days of no grocery stores or convenience stores, no refrigeration, and had to feed six hearty appetites with very limited storage volume and towing capacity; and there is a mutinous limit to how many times I can serve lentils or jerky), then either the pioneers and seafaring braves had intestines of steel or muted senses of smell (or both).

You cannot rely on the U.S. Forest Service to stock toilet paper in their outhouses during the off-season (which lasts until Memorial Day in Idaho and Montana, in case you were wondering).  We have unwittingly groomed a generation of toilet paper thieves due to our single roll of toilet paper proving insufficient for our week off the grid.   Now whoever is first to enter whatever public bathroom we come upon loudly announces the toilet paper supply status and will proudly walk out with a stash in hand or spilling out of his/her pocket for leaner times ahead.  We’ve tried to curtail this practice now that we have returned to civilization and more regular services, but the neurosis seems to have stuck.

11 Responses to The big sky is upon us